B&D Shooting Range offers three yearly open-shooting leagues that run 12 weeks. Each league has two divisions: Rim Fire & Center Fire. You may participate in one or both leagues and you set your own time through the week during store business hours. Each week consists of two different targets which will change in distance weekly. At the end of the regular league shooting date, top shooters in each division face off for the Top Gun Shoot-Off. The following week B&D Shooting Range hosts a league banquet dinner (cash bar) where we celebrate each other’s achievements and company. Of course no league banquet would be complete without recognition, and during the banquet dinner trophies are awarded to top shooters in addition to prizes, including a handgun as top prize!

Top Shooters in 4 Divisions
Worst Shooter (“What The Heck Was I Shooting At?”)
Top Female Shooter
Most Improved Shooter
Door prizes and Gun giveaway!

Contact B & D Shooting Range to register your shooting group for the next Shooting League.
440-277-5252 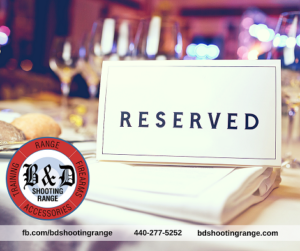